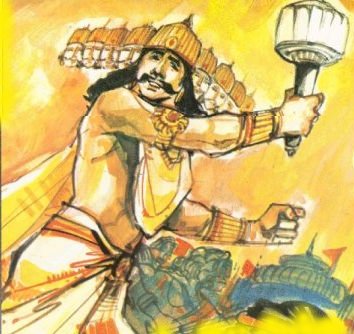 In the Age of the Ramayana Epic, Ravana was the most powerful Tamil King of Lankapuri (Ceylon or Sri Lanka). He was a renowned devotee of Siva, who was pleased with his severe penances and austerities, granted him the boons of earthly fame and worldly might. Ravana was a very talented Veena (Indian music instrument)  player. Ravana used Veena picture on the country flag. Ravana is not a Hindu God but rather a demon given great powers by the Gods because of his worship. The Gods granted him immunity from Death by a God  and conferred super-powers upon him. Ravana set himself up as Tamil King of Lankapuri (Ceylon or Sri Lanka).

In the height of his sovereignity, imbued with the desire to have the Lord of Kailas, his tutelary Diety installed in 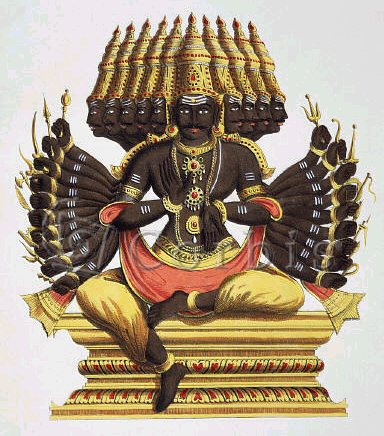 Lanka, he exceeded the limits of disciplined discrimination, and attempted by his invincible strength to transfix Mount Kailas, the traditonal abode of Siva from the Himalayan region to that of Lanka. He was foiled in this feat by the Lord crushing him under His Feet; and finally it was his astonding act of penance that saved him from the wrath of Siva. Ravana ripped into his left thigh, removed the nerve fibres and turned it into a lyre, and sang praise of Siva. Then it was that Siva released him, pleased with his mortification. This episode of Ravana was constantly alluded by the Saiva psalmists to signify that piety and devotion alone without purity and humility, could not redeem man or give him peace. Ravana was a great Hindu Bhakta; yet his code of life violated the Hindu Dharma and he had to pay for it dearly.

Again in the life of Ravana, his insatiable pride and lust made him carry off Sita, the chaste wife of Rama of the powerful dynasty of Raghu at Ayodhya, when they were living in the forest in exile. Rama and his union with the monkey God Hanuman to eventually attack Lankapuri ( Ceylon or Sri Lanka) and kill Ravana. Ravana was able by magic art to take his soul out of his body and leave it in a box at home, while he went to the wars. Thus he was invulnerable in battle. When he was about to give battle to Rama, he deposited his soul with a hermit called Fire-eye, who was to keep it safe for him. So in the fight Rama was astounded to see that his arrows struck the king without wounding him. But one of Rama’s allies, knowing the secret of the king’s invulnerability, transformed himself by magic into the likeness of the king, and going to the hermit asked back his soul. On receiving it he soared up into the air and flew to Rama, brandishing the box and squeezing it so hard that all the breath left the King of Lankapuri's ( Ceylon or Sri Lanka) body, and he died. You will get much pleasure from reading the Ramayana and tracking the whole adventure. 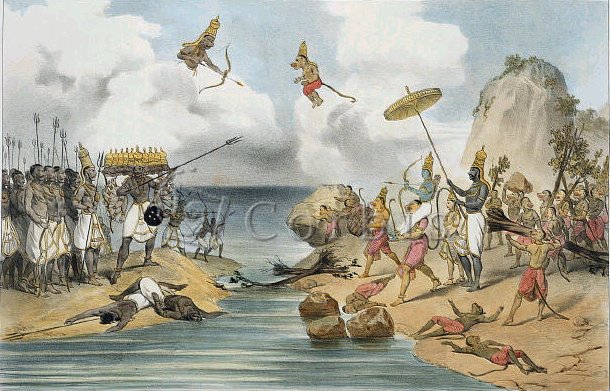 There are lot of evidence proofs  that powerful Tamil King of Lankapuri (Ceylon or Sri Lanka) Ravana has been lived in Trincomalee. Because the Tamil tradition has it that the wife of the mythical king of Lankapuri, Ravana who was a devotee of Siva, worshipped at the Koneswaram shrine in Trincomalee. Another proof is Discovery of Ravana's swayambhu lingam. It was originally found on a Tibetan mountain and later brought to Sri Lanka reportedly by the Tamil King Ravana. Moreover, in the Ramayana Epic period Ravana has used Veena as Ceylon Flag and according to the "Veena" Pictures on the Trincomalee  Fort  proofs that Ravana has dominated in Trincomalee. Also the seven Hot Wells ( Hot springs ) in Kanniya was made by the Tamil king Ravana.