CHRONICLES OF HEAVEN ON EARTH

A SPECIAL REPORT FROM SWAMI’S ABODE IN BRINDAVAN

It was a pleasing time, it was a heavenly time, but all good things had to come to an end. After a very special and enchanting 15-day stay in Kodaikanal, Swami left this place of enchanting beauty on April 23rd and emplaned for His summer residence of Brindavan, in the suburbs of Whitefield, Bangalore. There is so much to share with you about the wonderful happenings in Kodai Kanal that we have decided to have a series of articles on Kodai Kanal entitled “With The Lord In The Mountains” starting from the next issue. In every issue from July, you will get a drop of the Divine Nectar that was Swami’s visit to Kodai. Also if you have not seen the photo Album of this issue, we have some enchanting snaps of Bhagawan in Kodai Kanal and this time the Photo Album is really unique because it is dynamic. We will be changing the Photo Album with a fresh set of nine pictures everyday almost till the end of June. So you are going to get immersed with Sai in the sylvan surroundings of Kodai Hills. For now, we continue to report on His activities during His stay in Brindavan after He returned from Kodai Kanal.

Every year, this anniversary is traditionally celebrated with great fervour with bhajans and Narayan Seva on April 26th if Swami is resident in Brindavan.

The morning started as usual, with the Divine darshan. The entire dais had been well decorated with floral garlands and wreaths even at such short notice as Swami had only returned a couple of days earlier from Kodaikanal. The early morning celebrations started on an auspicious note with Mangala Vadhyam (Nadaswaram music) by a bunch of dedicated musicians in front of Trayee Brindavan. The public were treated to a delightful mix of bhajans sung by the Institute students who had sacrificed their holidays and elected to spend it with the Lord. After about an hour of bhajans, mangala arathi was taken and prasadam was distributed to one and all.

But the morning’s festivities did not end there. More was on the agenda, which however most of the public did not get to see. As Swami was returning to His residence, the Bangalore Seva Dal obtained His blessings to do Narayana Seva (distribution of prasadam - a sumptuous plate of sambar rice and sakarra pongal – sweet rice - to the underprivileged) and vastra dhanam (giving of clothes to the needy) to benefit about 400 persons from the neighbourhood.

Another tradition that is not normally visible to the public is that on this day the students and some of the staff resident in Brindavan decorate a portion of the garden in front of the Divine Abode. Swami usually spends some time viewing these decorations when He returns after the morning darshan, and also poses for photographs with the boys who had laboured through the previous night to win His approval.

This bhajan group has a hoary history and was started in December 1968, soon after Swami’s return from East Africa, and they started singing bhajans under the mango tree inside Swami’s residence at that time. Later on Ugadi day – March 19, 1969, the official Brindavan Bhajan Group, started bhajan singing – on Thursdays and Sundays when Swami is resident in Brindavan. When Swami is not physically in Brindavan, the bhajans are sung on Sundays. Presently the Brindavan Group consists of 100 singers and accompanists, out of which 57 are ladies and the other 43 are gents.

Saans Saans Mein a Hindi song exhorted the Lord to help us remember Him with every breath; the Sanskrit Dheera Sameera Yamuna Theere expressed a prayer to keep us away from all that keeps us away from You; singing the glory of Sai with the Malayalam Brindavanathille Sai which says that Your enchanting darshan as Brindavana Sai Krishna makes us forget ourselves.

After this arathi was taken and the formal programme in Sai Ramesh Hall concluded with the distribution of prasadam.

In continuing with that tradition, this year too, later in the evening after the Sun had gone down, “Sai Akhanda Jyothi” was alight with thousands of candles – in and around Trayee and all around the Ashram complex. All the devotees – both men and women – participated in lighting the candles. The entire Ashram campus was aglow with the light from the thousands of candles and also the multi-coloured electric light bulbs. All who had the fortune to be present and witness the grand spectacle of the illuminated Brindavan felt that this was indeed the “Bhooloka Vaikuntham” or Heaven on Earth!

Swami came out in the balcony late during the evening and sat for a few minutes witnessing the lights from all sides and giving a special darshan to all those who were waiting for Him after lighting the jyothis. 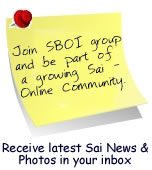