Today morning 19th Feb. the kulwant hall was packed with devotees to get Swami’s darshan after His return here in Puttaparthi from Whitefield. Lines were long and many devotees were up early to get good lines/token etc. However, no body knew when Swami will come out to give His darshan. At 9.00a.m. the bhajans started at around 10.00 bhajans ended with Arathi. At that time it dawned on all present in the Sai Kulwant hall that Swami won’t come for morning darshan. Also, in the evening lines were long and expectations were high because everyone was convinced since Swami didn’t come in the morning He definitely will come in the evening and surely Swami didn’t disappointed and all the expectations and anticipations were fulfilled. Swami came at 4.20 p.m. normally Swami switches off the small chandeliers outside His residence’s round balcony before getting in His car. But today those light were still on morning and evening therefore many devotees who take their clue from those lights of Swami’s arrival in Kulwant Hall were at a complete loss. Anyways, Swami got in His Toyota car and was driven slowly towards the mandir; Swami also took letters on the way to mandir and at men’s side an album was presented to Swami in His car by a group of devotees; Swami really took interest in this album and flipped through the pages enjoying every single page. 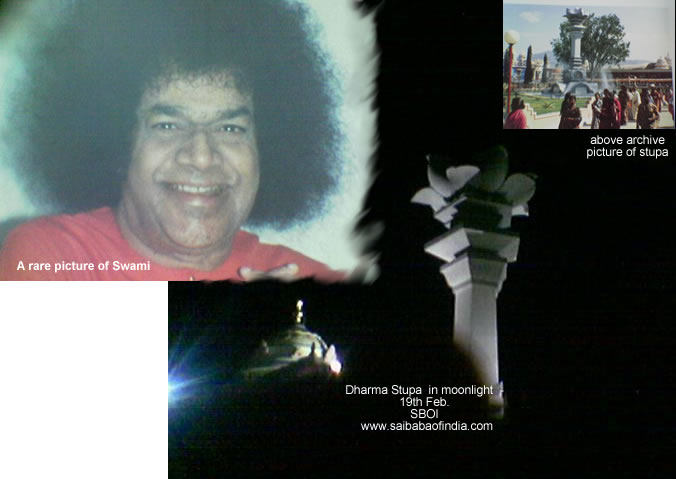 Swami’s car came to halt near interview room and Swami’s mobile throne came out, Swami didn’t use His mobile throne instead He decide to walk and every body applauded. All this time the Vedic chanting was going on. Swami took a  usual walking round of the mandir veranda talking to devotees sitting there. After few minutes Swami walked up to the centre of veranda and sat on His throne. On Swami’s instruction a mike was set & shri Gokak gave a speech, generally about how everyone had missed Swami and now that He is back everyone was happy again and how we devotees love His physical form.  After this there were two more student speakers. Swami later went inside His interview room.  Later around 6.p.m.Swami went back to His residence. - SBOI

This morning, Bhagawan did not come out for Darshan. Therefore, in the evening, we all hurried to the Mandir, pining to have His Darshan. At 4.10 p.m. the restless devotees whose eyes were glued to the Poornachandra Entrance, heaved a sigh of relief when they finally saw the car make its appearance at 4.10 p.m. At 4.20 p.m. we could see the flash of the orange robe as Bhagawan was wheeled into the car.

As the car made its way along the pathway in the Kulwant Hall, we could see a big group of men wearing white turbans seated on the gents' side. As Swami's car approached their area, the coordinators stood up and moved towards Bhagawan. One of them held an album in his hands and started showing some photographs to Swami. Swami very keenly watched all the photos and the car remained stationed there for quite some time until Swami had seen the whole of it.

The car moved on and finally positioned itself as usual in front of the interview room. The door slid open and the beautiful form of Bhagawan was seen moving out on the chair. After the chair rolled out, our brothers helped Swami to stand and then catching their hand, Bhagawan started walking into the middle Portico. As He moved along, He enquired so many devotees about their personal matters. Slowly, He appeared at the other end of the middle Portico. From there, He took a turn and started walking towards the dais.

Again, as He moved along quite fast, He spoke to almost everyone in the front line, including Prof. Anil Kumar of course. Swami's chair that was kept in the centre of the dais was shifted towards the gents side as per His instructions. Bhagawan reached the chair, stood for a while showering His Divine Looks on many and then sat down. First He spoke to Mr. Chakravarthi and then He interacted with Prof. Anil Gokak, our Vice-Chancellor. Immediately, the Vice-Chancellor spoke to Prof. Anil Kumar and a search began. It was clear that Bhagawan wanted some students to speak to all of us.

Within minutes, a number of students were lined up, as speakers are never in shortage in Bhagawan's college! By 4.50 p.m. the mike was placed in position along with the podium. Meanwhile, Swami received letters from a number of students seated in front. He spoke to them, answering their queries. At 4.55 p.m., Vedam stopped and Prof. Gokak shared with the audience the great joy that all of us felt at having our dear Lord with us again. He elaborated on this aspect for some time and then invited the student speakers too, to share their joy and happiness and also the agony that we all felt in His absence for the last one month.

The first student speaker was Sri B. Aravind from the I MBA class. He beautifully and very aptly narrated the story of the Gopikas in Brindavan who were pining for their Lord when He was away in Mathura. Any amount of consoling would not help them and finally when the Lord Himself sent Uddhava with the message of His Omnipresence and Omniscience, that too would not satiate their thirst for the Darshan of the Lord.

Following this, Sri Aravind shared with us an episode of Bhagawan's Omniscience. In the year 2004, in November, he and a group of students were involved in writing the script for the Convocation Drama. They had prepared 2 to 3 scripts and finally Swami had chosen one. However, the boys were very fascinated with another script that they had written. It was about an architect who also happens to be a student of Swami (in the story of course). This architect dedicates his whole life to build a Sarva Dharma temple for Bhagawan. However, owing to ill health he resigns from the company but then indirectly helps in completion of the project. Bhagawan, in an interview, pleased with his sincerity and commitment grants him the boon of making his temple a success and also grants him a long life saying that his body was Swami's true temple.

The boys felt a little disappointed that this script was not selected. A year passed by and came November 2005. Again the same group was engaged in preparing a few scripts. They had completely forgotten about this story. However, Swami Himself reminded them that He had already given them a script. It took them quite some time to understand what Swami meant and finally prompted by Him, they dug out the same script which then happened to be staged recently in November 2005.

The second speaker was Sri Chetan Raman of the I Year MBA(Fin) class. He shared with all of us the fact that how lucky students are as Bhagawan Himself becomes their Mother, Father, Guru and even a Guest. Normally, we chant Matru Devo Bhava, Pitru Devo Bhava, Acharya Devo Bhava and Athithi Devo Bhava. But for the students, it is just the reverse! Devo Matru Bhava, Devo Pitru Bhava, Devo Acharya Bhava and Devo Athithi Bhava. He illustrated each point by sharing experiences from his own life and finally concluded his speech with a Hindi song - Itni Shakti Hamein Dena Daata .... Give us such strength O Lord that the faith in our minds does not weaken....

It was 5.25 p.m. and Bhagawan signalled for the Vedam chanting to start again. At 5.35 p.m., Bhagawan asked the Bhajan boys to commence the Bhajans. As they stated singing, Swami stood up holding the railings. As He stood there, tapping with His fingers, from the Gopuram side entrance, a team walked in. Led by Mr. Rajan of the Ashram and the Anantapur Collector Smt. Anuradha, was the Governor of Gujarat, Shri Nawal Kishore Sharma. He walked unto the dais with his aide and Swami looked at him and smiled.

The Governor sat down on a chair placed for him near the Ganesha idol. After a while, Swami walked back to the Middle Portico talking to a few devotees as He went along. Watching Swami going towards the middle Portico, the Governor stood up and hurried to offer the bouquet to Bhagawan and seek His Blessings. Swami halted, turned around and received the bouquet and Blessed the Governor and even his aide with a few words and smiles.

Swami continued walking in. After entering into the Middle Portico, He sat down on the chair. He went into the interview room and at 5.45 p.m. He received Aarti and retired for the day.

This evening, Swami arrived at Parthi just before 4.30 p.m. after starting from Brindavan Ashram at around 1.00 p.m. There was a brief stopover at Bagepalli, a town on the way where an old age home and a Sarva Dharma temple has been built by a devotee of Bhagawan.

After entering the Sai Kulwant Hall, He got down at the first pillar on the ladies side, walked up to the portico holding our brother's hand. The Welcome song was going on, sung by the music group inside the Bhajan hall with others joining them. It was a Divine treat to watch Bhagawan after almost a month, and too walking with such ease! After a few minutes, He took Aarati.

As the Aarati was going on, Swami came into the Bhajan Hall and sat on the throne. After the Aarati, He asked, "Bagunnara?" - Are you all fine? The boys chorused "Yes, Swami". Then He walked into the interview room. Swami was smiling and talking so cheerfully that it sent ripples of joy and ecstasy in all our hearts!

After a few minutes, the Porte car arrived, and the chair was taken inside. Swami came out on the chair and into the car, and retired to Poornachandra.

Bhajans commenced at 5.00 p.m. and around 5.35 p.m. our most compassionate Lord, wanting to Bless us once again came into the Kulwant Hall. He went to the Bhajan Hall, sat on the throne and was there for around 3 to 4 Bhajans. He then took Aarti once again and retired to Poornachandra.