Celebrating the Festival Of Lights, Deepavali, echoing the beauty of the Advent of the New Year, Gujarat – Saal Mubarak, devotees from Gujarat are in Prasanthi Nilayam, celebrating the twin occasion. 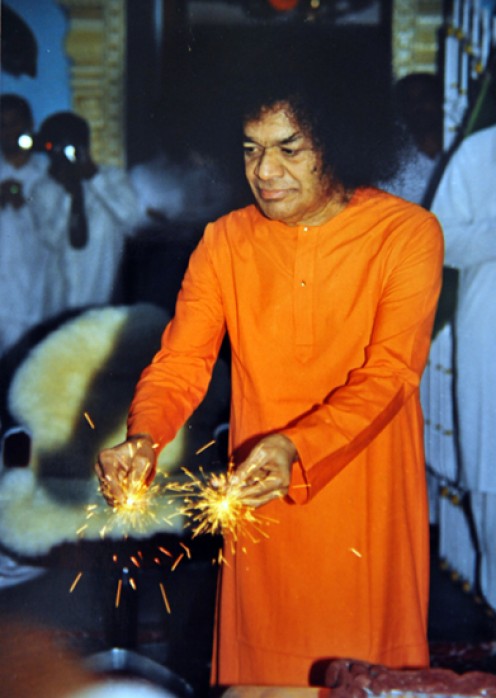 The festival of lights has been made more fun, beautiful, wholesome and spiritual by dear Swami (Bhagawan Sri Sathya Sai Baba) by the way He celebrates it. Of course, the crackers and lamps are all there. But the light and sound are not only physical in nature - they reflect and resound within the heart as well. I have only seen videos of Baba lighting firecrackers which would bring great delight to the hundreds of devotees and children assembled on the sands. By the time I joined the Higher Secondary School, the style of celebrations had changed. Swami was no longer actively lighting the fireworks - but He continued to light hearts and warm them!

The Deepavali or Diwali evening would be the one most looked-forward to. After the evening darshan, Swami would deliver His Deepavali message. The Diwali discourse would be the one that would light up our inner skies with wisdom, insight and anecdotes. However, as always, I would be more interested in seeing the external skies light up more than the internal one! Almost throughout the discourse, I would be waiting for the final bhajan after which we would be allowed to run and catch our positions for the fireworks display.

There were large lawns on either side of the Sarva Dharma stupa (the massive pillar carrying the symbols and messages of all the major religions in the world) which would be the venue for the fireworks. Swami would go into His room in the Poornachandra Auditorium after the discourse. Then, He would come and sit in the 15-foot passage between the auditorium and the lawns along with all of us to watch the fireworks.

On one side would be us, the ‘senior boys’ and on His other side would be the tiny tots from Primary school. On Diwali, Swami’s communication would be mostly with the little kids. He would become a child among them and talk to them as the rockets soared to the skies and the bombs exploded on the lawns! I remember one sweet episode very distinctly which shows how Swami became a literal child! 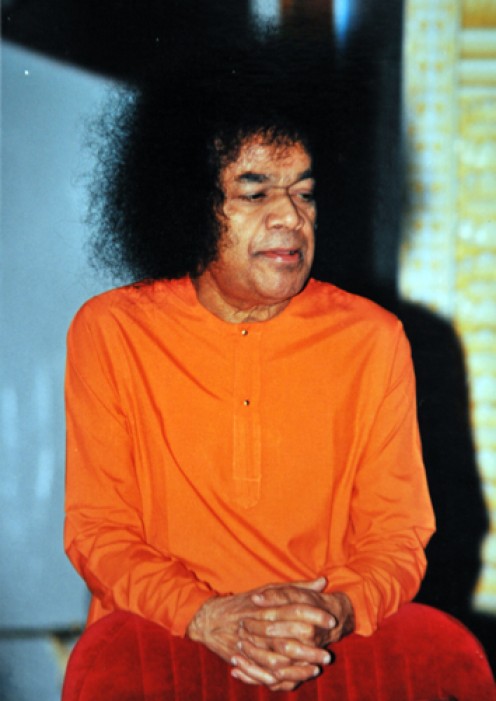 Just outside His entrance in front of the lawns. Talking with the students and waiting for the fireworks to begin...

As the skies light up, His face too lights up with a smile...

As I said earlier, the practice of Swami lighting fireworks had almost been discontinued. Yet, all of us would goad and coax Swami to participate. He would light a sparkler or two of course but we wanted Him to be more ‘involved’. Thus it was that every year, a 10,000-garland or mala as it called would be suspended far away. It would be lit electrically. The switch would be placed near Swami’s chair. He would throw the switch, the garland would light and for the next 3-4 minutes, a fireworks explosion would take place.

Swami too was happy and excited about throwing the switch. This particular year, the ‘switch’ had been built into a ‘card’. The ‘card’ was a piece of thermocole sculpture which opened like an oyster. Inside was the switch. When Swami saw this, He felt so happy. He called one of the elders nearby and explained on how He would be throwing the switch and how the opening ceremony would be a 10,000-garland. He did the explanation in a very animated manner - pointing out to the garland, the switch and almost performing the action of throwing the switch.

Now, just in case the switch failed, a boy had been hidden in the lawns. He would have an electric override to short-circuit and light the fireworks. His instructions were,
“In case Swami throws the switch and the fireworks do not come on, you throw the switch and make it happen. As far as everyone is concerned, it will be Swami who lit it!”

This is where a comedy of errors took place. Swami was so animated in His imitation of what would happen to the elder that the hidden boy on the lawns thought that though Swami had thrown the switch, the fireworks were not lighting. So, sincerely, he threw his switch and the fireworks began!

In the meanwhile, Swami had just turned His back to the elder. He was surprised by the burst of crackers that began that He turned around to the elder. He had a look of disappointment on His face and He said,
“I was supposed to throw the switch! Why did you do it?”
“But Swami! It was not me”, the elder protested.
“Then, how did the fireworks go off?” That was Swami’s question.

Swami continued to ‘accuse’ the elder of taking away His chance and moment of joy! The whole episode was so sweet and nice. 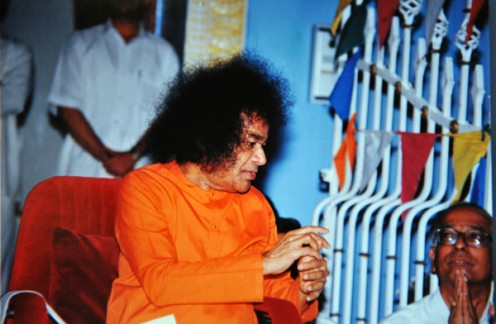 Explaining the way the fireworks are set off to the little 6 and 7 year olds! Swami literally became a child among children. 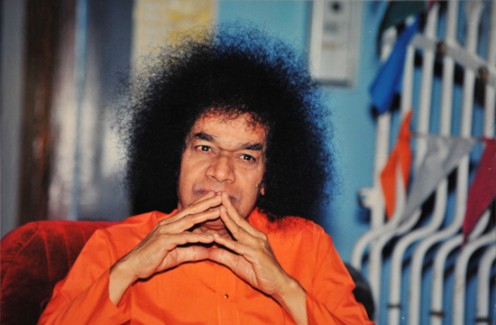 Gazing into the distance.... and beyond... This was a rare moment when I felt that Swami was 'there' and yet 'elsewhere' too! 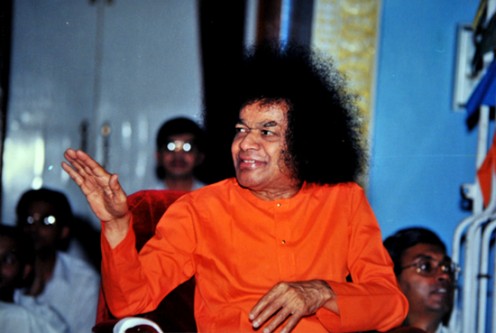 Blessing all the boys who had burst crackers and came to Him for little gifts of apples and sweets...
Well, I can go on with many more episodes - little ones which lighten the heart. I shall reserve them for another day maybe. This much I shall say here that Swami would distribute sparklers to the little ones with great glee and they would accept the same with the same glee! The 45 minutes or so of fireworks would be unforgettable. At the end of it, all those students who were involved in lighting the crackers would gather around Him and He would distribute fruits and sweets to all of them.

I conclude with prayers and wishes for love and light to everyone - may each day be a Diwali of God’s love and grace.

HAPPY DIWALI TO ONE AND ALL! :)

- Swami's delays are not His denials

- Lesson from a fish

-A dialogue on Surrender with Swami