"....Before long, a little boy came walking inside the bhajan mandir, with folded hands; to everyone’s surprise, it was the same student...."read more


Darshan news 13th March: Swami blessed us all with His darshan, both, in the morning and evening. today morning Swami came at around 7 .20 a.m. in the evening Swami came
at 3:30 p.m ...read more

Swami came out at appx. 7:15 a.m. in the morning. The Veda chanting filled the morning atmosphere of Sai Kulwant hall with spiritual “fragrance”, the Veda chanting continued till 8:50. a.m. At 8:40 Swami called a (lucky) boy student from 1st line & created a gold chain...read more

Darshan news 7th & 8th March - Sai Darshan: This morning, Bhagawan did not come for darshan. But in the evening, He came out of Poornachandra by 3 o'clock,.... read more

Darshan news 5th March:  Today morning 5th March, 2006 Swami came at 8:45 and took a full round of Sai Kulwant hall, as usual Swami, got down near.... read more Also, Today morning, before returning to His current residence. Swami went inside His new residence (newly constructed Sai abode, right opposite the current residence) & then went back to His old residence...

Photographs of Swamy visiting Bagepally recently on 18.02.06, on the way to Puttaparthy from Whitefield Bangalore.    Source: saibabaofindia Group


Darshan news 3rd & 4th March: Yesterday [3rd march] Swami came and sat on His chair inside the mandir while bhajans were in progress. Swami radiated so much bliss one could almost feel the harmony & bliss He was in, His eyes gently shut & enjoying the bhajans - for devotees present in Mandir/Kulwant Hall especially with good lines, it was up close and personal darshan of embodiment of bliss! 4th March Today Swami came little before & started talking to boy students. He also took some letters from students sitting there. At 5:30 Swami signaled for the Aarti. Swami is giving a lot of interviews these days to so many people. Before shivaratri we had no clue when in the morning or evening Swami will come to bless us for His darshan and it was not always we were blessed with darshan but theses days Swami has become “punctual” :-) Morning (approximately) 7:40 a.m. Evening at 3:30.p.m. 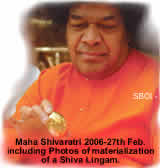 Sai Darshan news  & excerpts of Swami's discourse from today - 23rd Feb."...The program went
on till 4:25 then Swami signaled to give discourse, so the table was arranged for Swami with microphone. Swami started His
discourse at 4:30 it went on till 5:25. nearly an hours discourse was excellent teaching for all the students present and the devotees
listening. Swam talked about control of  5 senses,( and not to concentrate on 6th sense) concentrate on good thoughts specially
young boys ....read more

22nd Feb.Today morning Swami didn't come for Darshan. In the afternoon (evening darshan) Swami came at 3.55.p.m. Swami took a full round in His car got down on verandah and walked....read more 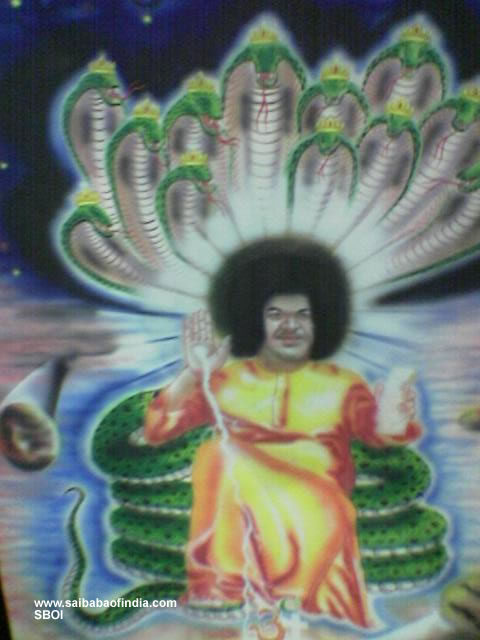 21st Feb. Today morning Kulwant hall was jam packed with devotees, everyday brings more devotees to Puttparthi due to upcoming festival of Shivaratri. MP-Madhya Pradesh sevadal is on duty and they are doing a fabulous job. Bhajans started at 9 a.m. and everyone thought now Swami will come at appx 9.30 with the last Bhajan going on, one could see Swami’s car parked outside His residence. Arathi started and ended but Swami didn’t come; Swami’s empty car was driven back to the garage again.

Evening Swami came at 4:30 p.m.
There is a group came from Ooty here and Swami distributed clothes to them not Himself but thru the sevadal Swami was present there afterwards Baba took all the group Ladies & Gents for interview in Bhajan Mandir for 1/2 hour. Then the darshan was concluded with bhajans at 5:30p.m as usual.

Here is a picture of handmade painting of Sai Baba by an Indian artist on sale at Leepakashi complex of AP goverment shop here in Puttparthi, We can't gaurantee but guess it was for appx. Indian  Rs 16,ooo. Next week we'll publish (online) a full page photo feature about this beautiful complex with leepakshi shop which was inagurated by Swami few months back.